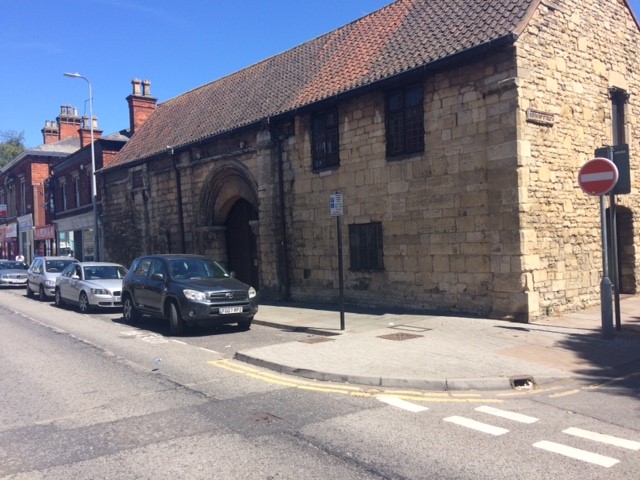 St Mary’s Guildhall is well away from the principal tourist area around the historic Cathedral quarter in uphill Lincoln, yet on a part of the lower High Street which formerly comprised of several impressive medieval buildings (some of which are still around today). This area was known as ‘Wigford’, the most important in the Medieval City of Lincoln as this has been shown by the vibrant archaeological finds of late dating from Roman to late Saxon periods.

The building, above, originating perhaps as a royal base in 1157 and was supposedly used for over three centuries for the City’s socio-religious Guild, then in less prosperous times it became a school for the Lincoln Christ Hospital ‘Bluecoats’ and later underwent two major phases as maltings.

St Mary’s Guildhall is located 1.5 km of Lincoln Cathedral and in the Medieval period the area was a long narrow island which was defined by water-courses. To the west and north was the River Witham, which now follows a narrow channel created in the late 18th century, but which was a much wider river in the Middle Ages.

St Mary’s consists of three ranges: the West along the High Street and running back from it in the Courtyard area is the North Range and South Range (Sibthorpe Street) which is more modern and was built around 1895 when Sibthorpe Street was laid out.

The West Range (above) survives in an incomplete state and was a building of the very highest quality both in it’s design and execution and was built of Lincolnshire limestone (possibly used from local quarries).

There is a highly decorated central gate arch which is the centre-piece of the west facade and which consisted of five bays and has shallow buttresses with chamfered plinth and a band of Romanesque sculpted decorations.

The Courtyard area is the space south of the North Range and east of the West Range and probably functioned as a partially enclosed area as a meeting point.

On the site of the Lower Hall, West Range (above) shows that St Mary’s Guildhall complex was built on top of a major Roman road running under the eastern (Roman Ermine Street) and western boundaries of the site which is known as the ‘Fosse Way’ of which you can see, still to this day, visually the carriageway ruts. This road originally linked Exeter in the south-west and Lincoln to the north-east. There is also a doorway to the newel staircase.

The North Range (possibly two storeys high) was evidently part of the first complex of buildings which has also been, in parts, demolished but the precise date of this is uncertain. The North Range does incorporate many fragments of architectural detail which must have come from some of the used stone. The range above seems to have been used as a Malting house at a later date. There may have been a kiln which would have been the centre piece of the North Range, which is reported to have been removed at a later date.

This is a two storey building and on the ground floor the building has two doorways and two windows in the south wall with a single window in the north, whilst upstairs, underneath there is a simple oak roof. There is also two reused windows in the south wall on either side of a fire place and a third in the north wall. The use for this building is not entirely clear and it may have intended to be used as domestic premises.

St Mary’s Guildhall was built probably by Henry II for a Crown Wearing Ceremony and used as a royal residence and Storehouse as there are records of King Henry III selling wine from this building in about 1236.

The building was then given to the King’s butler and after his tenure he then gave it by charter to the Great Guild of St Mary – a socio-religious Guild.

It was one of the major ‘Guilds’ of the Country and had very important members of the community and area of Lincoln and would have had King Henry III as a member. The Guild was dissolved through King Henry VIII and the property income then went to the Common Council, known today as the City of Lincoln Council.

The City Council have previously rented it out for commercial uses such as chimney sweep, undertakers, maltings, brewery, Christ Hospital School (Bluecoates – 1614-1623) and lastly as a builder’s merchants – C R Lucas & Son Ltd.

This Great Hall was for the use of banquets, Guild meetings and the room would have been at least 15 inches higher and probably running the full length of the building and would have been the grandest room in the West Range. One of the most striking features of the Hall are the row of windows which are divided by a central shaft and have adapted window seats. There is also the remains of an impressive large fireplace and on the north wall of the hall is an impressive blind arcade supported by very elaborate capitals carved with acanthus foliage. At the end there is also a newel stair which emerges from the Lower Hall which could have been a private access to the Hall.

Today Lincoln Civic Trust reside in the building looking after it’s usage for Community purposes and the Lower Hall and Great Hall can be generally hired out as a venue (parties/wedding receptions, musical evenings, Tai Chi etc) or as a meeting room or booking for just a look around this majestic medieval hidden gem.

If you require any information on the building, or by becoming a member of the ‘Civic Trust’ then please do contact the Lincoln Civic Trust by e-mail on lincolncivictrust@btconnect.com or by www.lincolncivictrust.co.uk or telephone the office on a Monday or a Tuesday from 9.30am until 2pm on 01522 546422 or leave a message on the answerphone.

The Lincoln Civic Trust also sell books which have been published such as ‘Fascicules’ of uphill areas and other books that have been produced by the ‘Survey of Lincoln’ group (https://www.thesurveyoflincoln.co.uk/pubs).

Credits to: David Stocker (with contributions from various other people) – St Mary’s Guildhall, Lincoln – The Survey & Excavation of a Medieval building Complex and to Paul Whitelam – Lincolnshire Live for the Video clip (https://www.lincolnshirelive.co.uk/news/lincoln-news/st-marys-876057) and from Lincoln Civic Trust publication on ‘St Mary’s Guildhall’ – A Brief Historical & Archaeological Description’ by CPC Johnson/D A Stocker – 1986